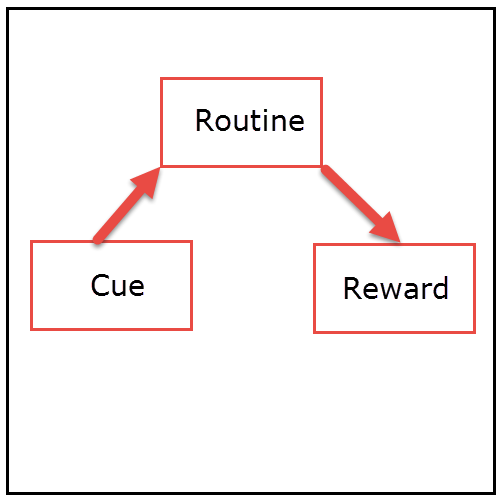 Habits. Most of us probably think of something negative when we hear that word. Maybe we think about eating unhealthy food or trying to exercise more.

However, habits are a powerful tool that we can use to change how we operate in our day to day life so that we get more done, are more healthy, and carry out the tasks that we have set in front of ourselves.

How does this all work?

The idea behind this is the “habit loop” (If you’re interested in this idea you should check out this amazing book on habits and the research behind them). It’s simple when broken down like this:

What you are doing when you go into “automatic” response mode is you have some stimulus or “cue” that makes you perform some action or routine.

You are doing this due to some sort of reward.

When you are hungry, you might grab the first thing you see (bag of chips?), eat them and then get the reward of the salty taste and having a snack.

This can obviously be used for things that don’t really help you – the idea behind all of this is recognizing what the cue is and what the routine is. If you can change the routine and get the reward you win!

For example, let’s say that when you get distracted while doing Excel spreadsheets or writing reports, you tend to click over to a new tab and look at Facebook.

You get an immediate reward but you’re also wasting your time and shifting “mental gears” outside of your work.

So, what if instead of doing that, you got up, and took a 2-3 minute break where you take a quick walk outside or around the office? Which would be better for you?

Both offer a reward and an immediate action to take – this is important! Think about how most people try to change their habits. They’ll try to just stop a habit or start a new one out of nothing. There is no cue. There is no reward (yet). It’s really hard!

If you can recognize habit loops and implement new routines you can make some amazing changes and the best part is that it doesn’t even seem like that much.

What habit loops can you change for better productivity?