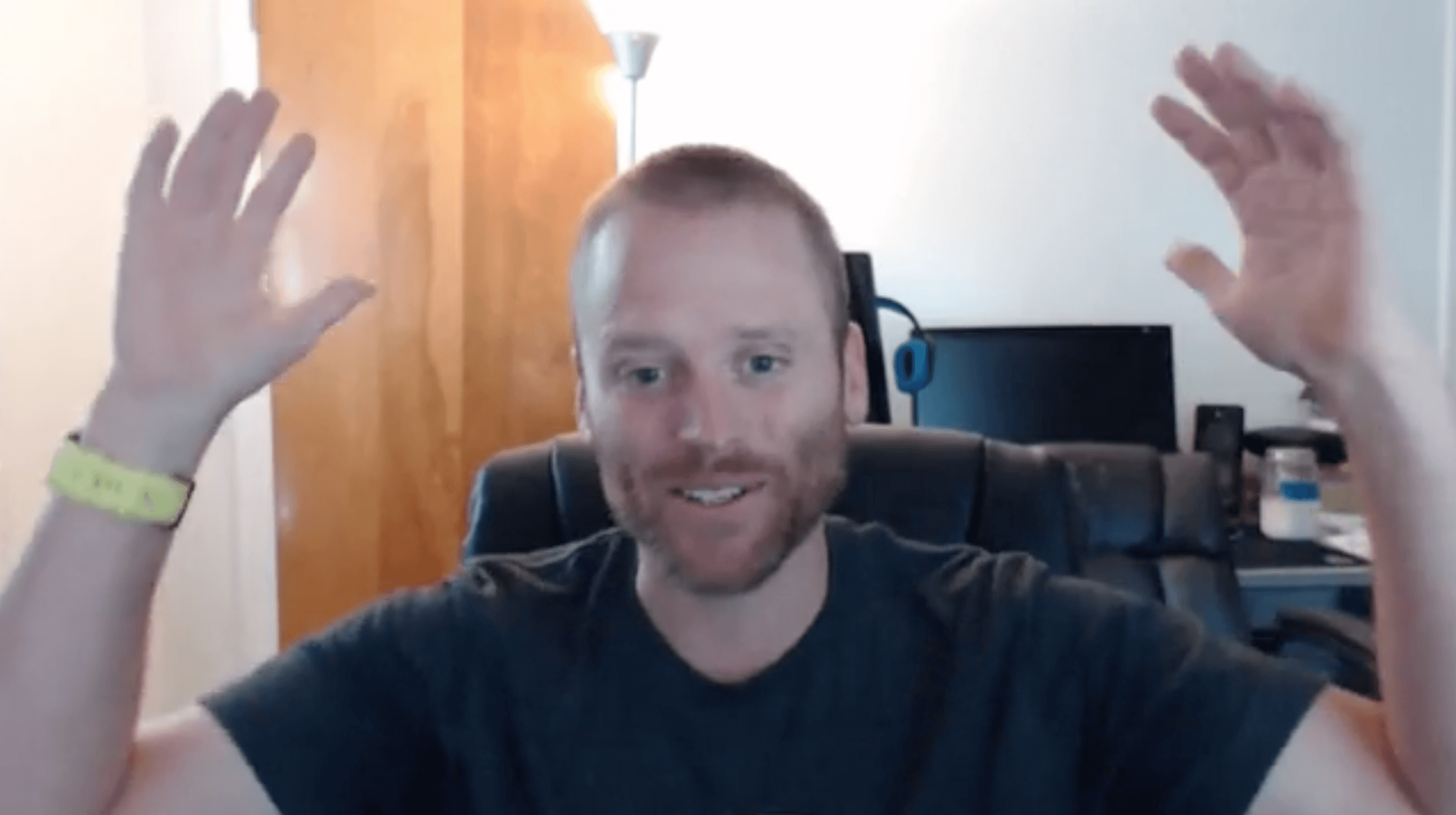 Hey everybody, this is Adam with Productivity Academy. Today is the ninth of August 2017. Got a pretty good day lined up here with some good questions. Real quick, if you haven’t watched before, answer some live questions as well as questions that have been submitted beforehand at productivity.academy/questions. Anything about productivity, time management, what apps to use, mindsets, and stuff like that. If you haven’t yet, also check out the website at productivity.academy, and if you’re watching this on YouTube you can click on the button and subscribe to stay up to date.

All right, real quick, I wanted to go over something that I talked about, or have gotten a title, but improving your productivity, why the hell should you? There was a quick … post the other day about do you ever think about why you should be improving your productivity or why you really want to work harder? Because a lot of this comes down to you have to make changes. There’s no app that’s going to do it for you. There’s no, you can’t use a journal, you can’t go buy this journal and be 200% more effective. None of that does it for you. What you actually have to do is to be consciously making the changes these things can help you do that, but if your head isn’t in the right spot then none of that really matters. Again, you can have the coolest tools and the neatest apps and the, this and that, but if you’re not putting them to use, if you’re not focusing and making the conscious choice then it doesn’t really matter.

A lot of this I think is important and for you it’s different than maybe what, how I view it. It’s coming up with, what is that goal? Do you have a goal? Is there a driving force? For different people, its different things and over time it changes. Again, I had thought about this a lot, and I used to be worried, “Oh man, I don’t know what I want to do.” Or “I don’t know what my ultimate goal is. How am I going to save the world?” That is going way too far, but saying, “Okay, I’m working on this project and today I had to knock out an hour, and a half of really basic admin stuff.” No joke, right before I hopped on here. It’s really boring. I don’t like doing it and I’m getting better at finding ways to either do it more quickly, more efficiently or delegate it.

At the end of the day some of it still has to be done, but saying, “Okay, I know what I’m working for. I’m helping to build this business so that’s really important, because there’s really tangible goals down the road.” Saying, “Okay, I’m going to have a business that I was proud to grow. It’s providing a really cool service, and I’m helping others both on customers, and my business partners.” Saying, “Okay, this is all providing things that I want in my life, and it’s going to help do things that I’m proud of or that I’m looking forward to.” Doing this what I consider dreary admin work right now, is going to pay off in the future. That’s just one example of saying, “Okay, I can … justify what I’m doing.” Instead of maybe being distracted and saying, “Oh, maybe I’ll just check Facebook real quick.” I can just say, “Man, I’m not even interested in checking Facebook. I want to power through this. This is going to have some really good results.”

I think that that’s one way to do it. Again, you can go with the bigger goals. I like what I do, it’s providing the future that I want. You can use those either for getting through some tasks you may not be that interested in, but also you can just get better at doing those. I think there’s two conflicting areas. You can look at things as like, “I should only be doing the things that really passionate about and love.” Okay, well, maybe in the grander scheme of things you should aim your life, so you move in that direction, but nobody does that 100% of the time. Whether it’s doing the laundry or again, doing some admin work. At no point in your life are you going to be completely free from that.

On the other side, you’ve got this idea that you’re going to chose something to do and just become so good at it that it then becomes something that you’re passionate about. I found that to be the case with several people I’ve known in my earlier career as an engineer. I talked to people like, “Hey, how did you come into this? You’re a well known person in this field. What brought you here?” “Well, I went to college, and I was interested in physics or this area and I needed a job, and I started doing this. I got better at it.” It’s not this romantic story, but it’s true that they focused on it and it provided something for them. Then, as they got more invested and spent more time in it, it became more meaningful to them. Anyways, an interesting way to look at those.

One of the questions today I wanted to cover real quick is, what are the things that you do or use in order to make yourself more productive and smarter? That’s an interesting one. I’ll just say it every time I can. Doing a daily review has been a life changer for me. Several years ago I used to not do this, or I would do it really sporadically. Sitting down and really planning out my day, going over my goals, lay out my tasks, look at my calendar, collect all my notes and go from there, has really helped me to be more productive. As well as, identifying what I’m doing and why I’m doing it and doing reviews on where I want to be and where I want to go. Whether that’s on a scale of, “Okay, next week this is where I want to be. Next month, these are the goals I want to knock out and in two years, here’s where I want to be.” Having that be as clear as possible. Again, they change. Sometimes I don’t reach them, but that’s okay. I have something I’m working towards. That helps me to be productive, that combination. Of course, there’s much more that goes into that, but those are the general ideas behind that.

As far as smarter, I’m a big fan of you’re never done learning. There’s always something you can figure out, or you can invest a little bit of time in to become better at. Maybe that’s, for myself, that’s reading I just enjoy reading. For other people that may be going through additional courses. You can find courses to invest in. You could maybe do audiobooks if you’re not a reader. Spending, can you put some time aside each week? Can you put 30 minutes aside 3 times a week to either further yourself in maybe your career where you’re at learning about that, or an area you want to learn more about. Most people don’t take the time to do this and by doing that you’re going to put yourself ahead of so many people. If you could devote two hours a week, and you did that for years on end, that’s an incredible amount of time. You’re going to have this depth of knowledge. Pick up a new language. Learn a programing skill. Do something on the side.

It’s not that you maybe have to become a master right away and you won’t, but you open yourself up to new ideas just by learning and exploring new things. I think that will not only make you smarter, but it’s also going to make you more productive. You’ve got more resources to draw on over time with these new experiences and this new, these new things that you learn.

I think for me that’s it. In terms of making myself smarter it’s just being open to learning, but then also being systematic about it. It’s something I’m still working on and trying to not let my schedule get so hectic that I forget and go a week or two without sitting down and saying, “Okay, I’m going to read this nonfiction book about,” like right now I’m trying to get through a book on client prospecting. It’s a little dry, but it’s going to pay off. It’s very business oriented and so, sitting down and saying, “I’m going to spend 30 minutes during my day, and I’m going to read this book or go through it. Take some notes and work my way through it. Then, I can move on to something else after that.” Just having that knowledge that you gain over time that’s like compound interest. You just do a little bit at a time and it really starts to pay off.

That’s my advice for that and we’re wrapping up now. Don’t have any live questions today, but if you ever have questions throughout the week or while you’re watching, you can go to productivity.academy/questions and pop it in there. Anything about productivity, time management, apps, anything we’ve talked about today or anything else. Thanks for watching and I’ll talk to you later.