We all know that Evernote is a great tool to use for a wide range of uses:

As with any popular application under active development, there’s always changes being made, tweaks to improve the system, and new concepts being tested.

Keep reading for a roundup of the latest news on Evernote and stay on top of one of the best productivity apps out there.

On the heels of quite a few other Windows app updates, Evernote has snagged yet another. We reported an update for Evernote a little over a month ago  and it appears the note taking service is still working to optimize its app for Windows. Fortunately, the changelog states the update “Improves Windows 10 support”, but unfortunately we were not provided any further details. The trend certainly bodes well for Microsoft as other large companies such as Facebook are looking to create and update apps optimized for Windows 10. Evernote Touch gets updated, makes it more Windows 10 friendly 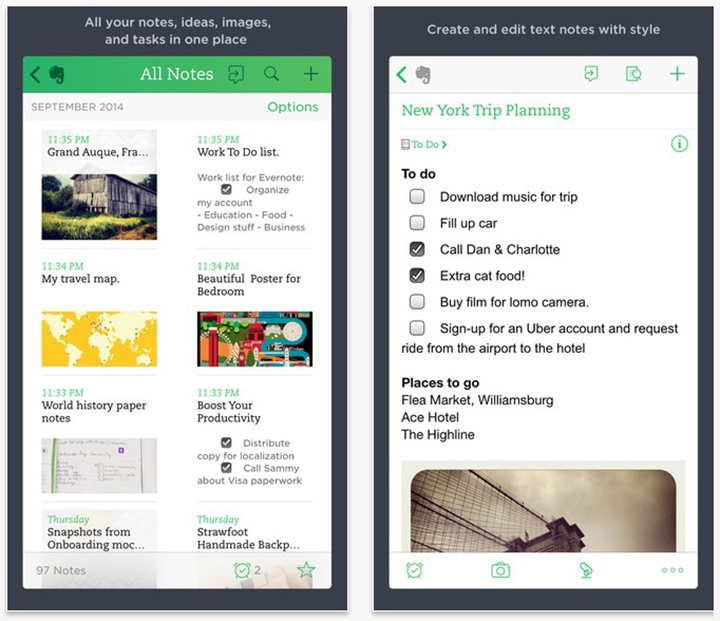 This is good news for anyone that is using Evernote in a touch capacity. Although this is probably a minority of users, this type of use case will likely see growth in the future as we turn to more touchscreen and interactive devices.

Google Keep vs Evernote: Which iPhone App Should You Use?

Google Keep is a relatively new addition to Google’s suite of apps, but it’s been available on Android for quite some time.

However, the note-taking app now joins iOS and allows iPhone and iPad users to jot down notes, as well create to-do lists and search for information by photo, audio, or text. It’s a simple notes app, but it has all of the necessary features that most users would want.

Perhaps the most popular note-taking app on the market is Evernote, with so many features to offer and the ability to sync notes across numerous devices so that you always have your notes with you wherever you go. How does Evernote compare to Google Keep? And which app should you use on your iPhone? Here’s what you should know about both apps. Google Keep vs Evernote: Which iPhone App Should You Use?

A little competition is always a good thing. If you haven’t tried out Google Keep, well, I suppose we should just do a quick review of it so that you can decide for yourself! Check out the full article for more information on Keep vs Evernote.

Evernote has received a sizable update, bumping it up to version 7.2. Included in the update are a number of new widgets to make capturing your thoughts and notes easier right from the home screen. While Evernote has always had a widget, these new widget options expand upon the functionality, and make things even easier. The new widgets are Actions, Action Bar and List. Each widget has a purpose behind it, and that is:

Additionally, Evernote is introducing Simple Notes. With these, you’ll be able to just jump in and write so you can get back to what you were doing previously. You can download the Evernote update from Google Play now. Evernote picks up new widgets to make capturing your thoughts even easier

The widgets in the mobile versions of Evernote make it a real powerhouse, being able to create notes, audio notes, drawings, and more with one press is a great addition. Now, it looks like they are adding in more functionality to make the widgets even more useful!

That’s it for now – we’ll keep tabs on Evernote and make sure that we stay on top of the updates and changes over time. Part of making these apps work for you and getting the most out of them is being aware of all of the features and tweaks that you can apply – this is what separates an app from being merely “useful” to being a real integrated part of your time management and productivity strategy.