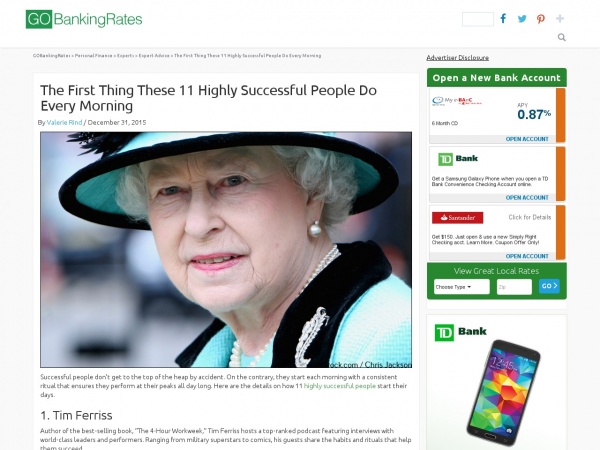 Ok – we’re not going to really cover 11 people…but I think it’s important for all of us to look at successful people and learn from what they do that RIGHT.

We can look around and identify habits that lead to productivity but sometimes the results can be surprising. I think that at least one of the habits below might seem a bit silly or not that effective, but I can guarantee that if you incorporate these ideas into your life they will have a large positive effect!

Author of the best-selling book, “The 4-Hour Workweek,” Tim Ferriss hosts a top-ranked podcast featuring interviews with world-class leaders and performers. Ranging from military superstars to comics, his guests share the habits and rituals that help them succeed.

First, Ferriss makes his bed, a task that provides him with both pride and accomplishment. Next, he meditates for about 20 minutes. Based on his conversations with world-class performers, Ferriss estimates that 80 percent of them meditate. The third morning ritual for Ferriss? He hangs from a simple rig in order to decompress his spine and increase grip strength. Ferriss also hangs for one-minute intervals throughout the day to break up work sessions. What Is The First Thing These 11 Highly Successful People Do Every Morning

I like the idea behind this, although I don’t always have to make my bed – but as you have probably figured out, it’s not the exact task that is important, it’s having a habit that gets you started on the right path each day. By making his bed, he accomplishes a task, feels good about it, and will carry that feeling and motivation into the next part of his day. It’s a smart mind-trick to get going each day without letting random happenstance mess with you.

And as number 5 on this list (mentioned in the tweet) shows, the opposite time of day is important too – getting sleep!

6 habits of the most successful people in your office https://t.co/hizmjYkn6B

As the longest-reigning British monarch in history, Queen Elizabeth II is undoubtedly one of the world’s most successful people. So, what habits have helped Her Majesty occupy her vaulted position for more than 60 years?

After eating, Her Majesty does not lounge around. She begins her work day by reading the top British newspapers and some of the hundreds of letters she receives from the public. The First Thing These 11 Highly Successful People Do Every Morning | GOBankingRates

This is another good idea and one that I follow. This is dependent on how exactly YOU function, but after getting up and getting moving (literally) and feeding yourself, that is usually the prime time for highly productive work.

If morning isn’t the best time, find out when you are “in the zone” and protect it as much as you can – these are the hours of the day when you can get more done than most people do in an entire day!